Guest author, Charles Askew, describes his experiences on a Saga Holidays’ Myanmar tour that he undertook with his wife last year.

As people who love visiting countries in the Far East my wife and I had been keen to travel to Myanmar (formerly Burma) for some time. Prior to 2010, foreigners were discouraged on ethical grounds from visiting Myanmar, but after democratic reforms tourism was welcomed again.

We decided to join the 14-day Saga Holidays small group tour “Unveiling Burma” which promised a wide variety of fascinating sights and experiences, and the holiday certainly lived up to expectations.

We travelled in early March, at the end of the dry season when temperatures were not at their highest. After an overnight flight to Singapore, and a connecting flight to Yangon (previously known as Rangoon), we arrived mid-afternoon at the modern Chatrium Hotel which has excellent rooms and guest facilities, including a beautiful swimming pool area.

All the hotels we stayed in were of a high standard and provided a good range of Western food, although the majority of our lunches and dinners were at local restaurants.

We found that Burmese cuisine was a blend of Chinese, Indian, Thai and other Southeast Asian influences. After savoury soup, delicious meat and fish dishes were offered on a sharing basis, plus vegetables, some tempura style, and white rice and dips. Curries were generally quite mild. All local restaurants catered for vegetarian guests who were helped with choices by the tour guide.

For drinks I usually ordered cans of tonic water, and other soft drinks were available plus Myanmar wine and a choice of cool beers, including the ubiquitous Myanmar Beer. All drinks were reasonably priced.

Our first evening meal was at The House of Memories, a restaurant in an old colonial villa with a historic heritage.

We visited an upstairs office containing photographs, memorabilia and items used by General Aung San, whose resistance to British colonial rule led to independence in 1948. His famous daughter, Aung San Suu Kyi, known affectionately by her supporters as “Our Lady”, became leader of the National League for Democracy which won a landslide victory in the 2015 elections. 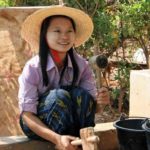 There are many ethnic groups in Myanmar (pronounced ‘Me-yen-mar’) and I tried to spot as many people from the different groups as I could. Women were easier to identify, as those from the same tribal group wore similar turbans and clothing. Often, women had fragrant thanaka paste, ground from the bark of the thanaka tree, spread onto their cheeks to give protection from the sun and improve their skin.

Everyone we met was very friendly and I was asked to pose with people for photographs more times than in any other Asian country. Age is regarded as synonymous with experience and wisdom and children are taught from an early age to respect their elders. Greeting people with a smile and the word “Mingalaba!” helps in all situations,

At all pagodas and religious buildings we had to remove shoes and socks, so our feet became a little dusty. Our guide helpfully handed out moist wipes to clean our feet. A reasonably good level of mobility was required to climb steps at various sites and the stairs on some old pagodas were a bit steep. I quickly learned to walk carefully after stubbing my bare toes a couple of times. Some group members found that their adjustable walking sticks were useful.

Entrance fees to sites were included and paid by our guide; an individual visiting the Shwedagon Pagoda, the most revered Buddhist temple in Myanmar, could expect to pay just US $8.

There were so many different experiences and places we visited that I can’t mention them all, but will list a few of the most memorable:

• The golden stupas and beautiful shrines in the pagodas of Yangon, where colourfully dressed families held ceremonies and gave offerings.

• Taking part in the oil lighting ceremony in the Shwedagon Pagoda as the evening light transformed the colours of the stupa and shrines.

• Spectacular views from an elevated pagoda of the many temples rising above the trees on the surrounding Plains of Bagan.

• A scenic rail journey to Mandalay, crossing the Gokteik Viaduct.

• A wonderful private lunch provided by the people of a local village.

• Watching how palm toddy is made and learning how silk is obtained from lotus flowers.

• Walking along the famous teak-wood U Bein Bridge.

• Seeing the fishermen using the one leg rowing technique on Inle Lake, and the superb experience of speeding across the lake in a canoe through the early mist as the sun rose over the hills.

Our visit to the enchanting country of Myanmar will be remembered as one of our favourite holiday experiences.

To quote Rudyard Kipling: “This is Burma and it is unlike any land you know about.”

POSTED 6th March 2017 by STEVE HANSON on behalf of CHARLES ASKEW. The photographs were taken by the author.

Touring Normandy, the Loire Valley and Brittany in JuneJust My Cup of Tea – Isaac’s Tea Trail in the North Pennines

Search by UK County or by Country

• For 15% discount on annual membership, click on English Heritage and enter EH2021 at checkout.

• To receive a £5 M&S Gift Card and free binoculars with annual or gift membership paid by direct debit, click on National Trust.

• For a £5 discount on annual and gift membership, click on Historic Houses, and use our special discount code STEW05.

• If you are 60+ get 20% discount on standard membership with National Trust for Scotland and you can visit National Trust properties in England as well.

Under 'RATES' select 'AARP/Senior'
(Most parts of the world, including USA, not UK)
• See discounts also at Marriott, Radisson, Ramada and Accor

• Flights with Skyscanner
• Travel with TripAdvisor

With excess insurance from: